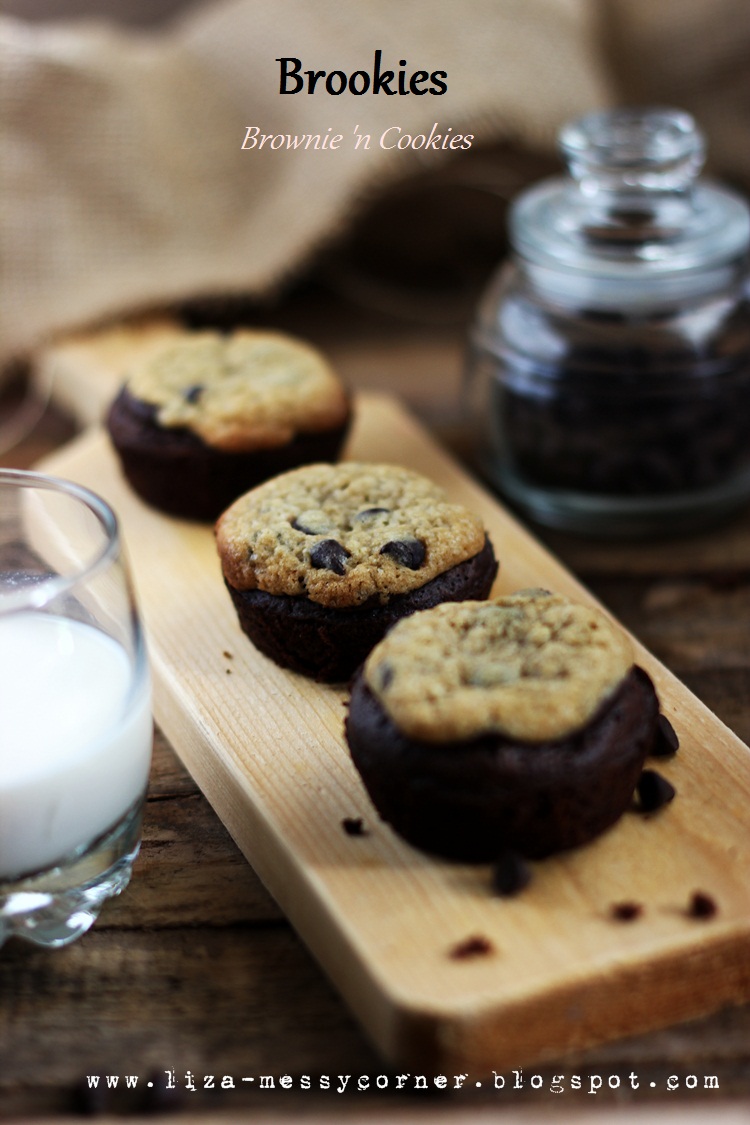 Have you ever feel so confused about what to bake for your family? I have. Lotsa time. It all happen because I have a bad habit of bookmarking every interesting recipe on the web...the list has become longer and longer and longer. Not to mention the pile of recipe books that I emotionally bought whenever I got a chance. I mostly end up baking nothing or different thing. Not the thing from all the bookmarked list or the recipe books *sigh*. So, I encouraged myself (well, push is more appropriate word, i guess) to start making and posting food from recipe books.

This brookies was taken from Annie Rigg's Fabulous Brownies. I was craving for something sweet and chocolate and also delicious n warm cookie. And this brookies (brownies and cookie) is a blessing in disguise.

If you can't decide whether to bake brownies or cookies, why not make both? I make this recipe twice. The first one, I follow the recipe to a T. What happened was, the cookie dough sunk inside the brownies while in the oven. And it taste a lil bit too sweet for me. So on my second trial, I make some adjustment to the recipe. And the result is perfecto for me. The cookie is soft and chewy, and the brownies is soooo chocolatey as I'm adding cocoa powder to the batter.

So here I write down the original recipe and pls read my note inside the brackets, thats the adjustment I made. 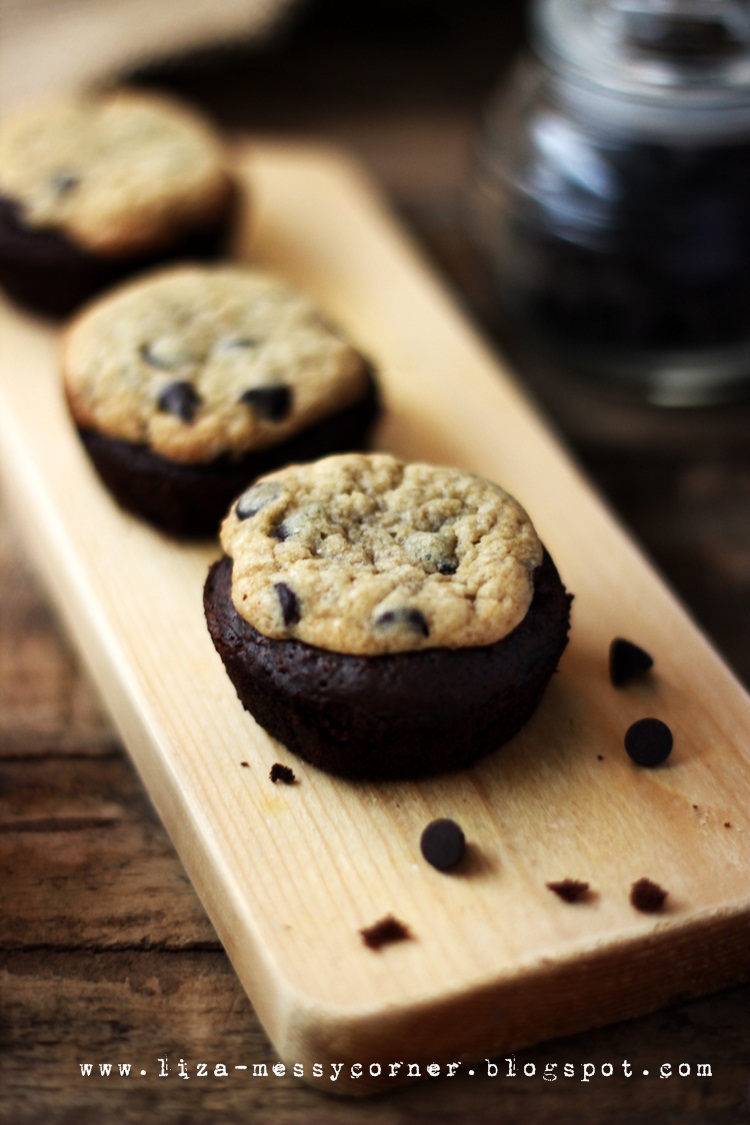 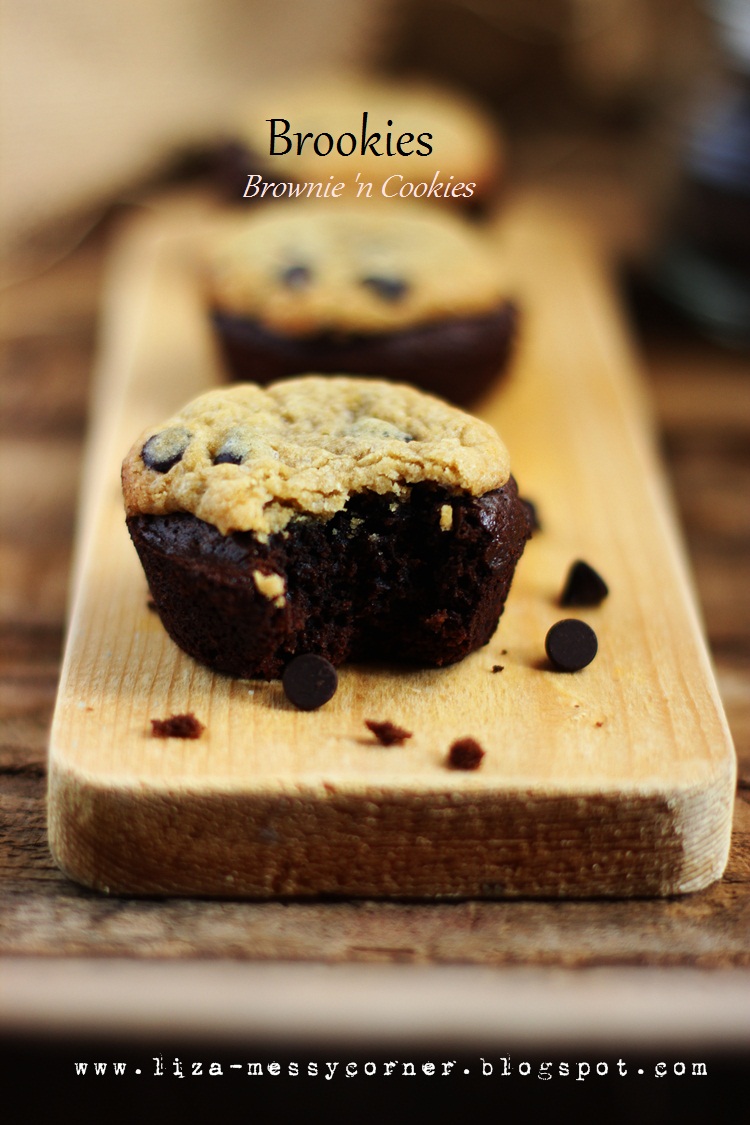 Make the cookie dough first. Sift together the flour, baking soda and salt. In a separate bowl cream together the butter and sugar until pale and light. Gradually add the egg. Beating well after each addition. Stir in the vanilla extract. Fold the sifted dry ingredients into the bowl until well incorporated, then stir in the choco chips. Cover with plastic wrap and refrigerate for 30 minutes.

Make the brownie mixture. Put the dark cooking chocolate and butter in a heatproof bowl set over a saucepan of barely simmering water. Stir until smooth and thoroughly combined. Leave to cool slightly.

In a separate bowl, whisk the sugar, eggs and vanilla extract until pale and doubled in volume ( note : I didn't wait until doubled, as I like more chewy brownie. My first trial with doubled in volume method the brownie texture is cake like). Add the melted chocolate mixture and stir until combined. Sift the flour, cocoa powder and salt into the bowl, fold in until well incorporated.

Bake on the middle shelf for another 8-10 minutes, or until the cookie dough is golden brown.

Posted by Eliza Setiawan at 7:58 PM 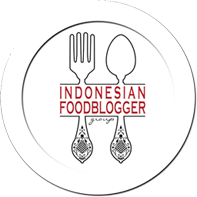